On the Maryland Politics Watch blog, Adam Pagnucco has posted an essay in response to our elected leaders asking what can be cut from the Montgomery County budget. Adam's suggestion: Cut County Cable Montgomery.

According to viewership numbers, very few people watch CCM. Since so few people watch it, I have to assume most readers of this blog don't even know what it is I will provide an explanation. In a nutshell, CCM is the C-SPAN of Montgomery County. CCM provides live coverage of council sessions, press conferences, and public affairs programming. CCM is delivered as a cable channel and many shows are available from the county website or youtube.

Adam observes that the CCM budget has grown substantially: 16.9% in FY07, 13.9% in FY08, and an amazing 22.9% in FY09. That is breathtaking, especially considering the cuts that have taken place elsewhere in the budget.

All too many of these programs seem to have a common primary purpose: making the incumbent office holders look good. Over and over again, politicians are shown prancing at press conferences, smiling to their adoring admirers and explaining why Montgomery County is such a wonderful place to live – under their leadership, of course. County Report, CCM’s flagship weekly program, is little more than a parade of such political frolicking.

I won't repeat Adam's other observations but I encourage you to read his essay. I agree with most of his points. However ...

It is important to understand that the CCM is not funded out of the county's general revenues. Rather, CCM is part of a separate budget (the "cable communications plan") that is funded primarily by franchise fees which are paid by everyone subscribing to cable TV. Pull out your bill and take a look. It may seem small on your bill (well, maybe not) but it adds up. The current budget calls for franchise fees of roughly $10.6 million. Revenues from some smaller sources bring the total income to $15.8 million for all things cable.

The cable revenues are not to be used for items outside the cable budget (although the county has been known to borrow from it occasionally). But the bottom line is that cutting CCM is not a useful response when our elected leaders ask what we would sacrifice to help balance the budget.

That said, cutting CCM might be useful for a number of other reasons. For example, our political leaders have better things to do with their time than do interviews that are watched by almost no one. The FY09 CCM budget is roughly $2.5 million. Of that, the Public Information Office (the source of the most pointless of such shows) is $720 thousand, about 29% of the CCM budget. (Would it be too much to ask that some of that be used to make CCM work on Apple Macs?)

In my opinion, many of the other shows produced by or distributed on CCM are also of little value. Most of them are just filler between county council sessions. What is missing is more valuable video such as council work sessions and committee and commission meetings. These videos would provide citizens with a much more useful understanding of what the county government does than pablum produced by a public information office. (Note that the county has an even larger budget for "public information" that does come from general revenues. And which should also be cut.)

In the past, I have recommended that we give up the channel entirely (presumably getting something valuable in return) and instead provide streams and archives over the web for the videos that are truly vital to informing the citizenry of their government. I recommend that for most of the channels in the PEG network.

As I write this, I have turned on CCM to see what is being broadcast. It's Councilmember Nancy Floreen holding her dog and talking about her family ("Lady is a rescue schnoodle ...") and showing family photos of her travels around the world. Very entertaining. But how is this a justifiable use of taxpayer funds? 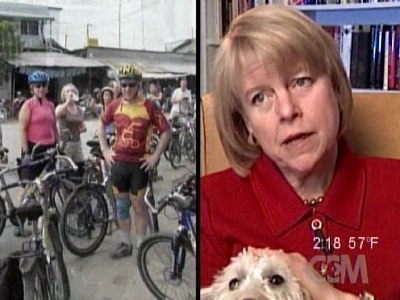