The following citizens have been nominated by the County Executive to serve on the Cable and Communications Advisory Committee. The terms are three years and unpaid.

I know of David Friedman, as he has provided testimony at communications-related hearings before the county. I don't recall having seen any others at any CCAC-related meetings, so my hopes are not high that they have a serious interest and will make useful contributions. Some past members have served simply for resumé padding or, from all that I can tell, want of something else to do with their evenings.

If you know of any reason why any of them would be inappropriate to represent your interests, contact the County Executive and County Council.

The following two CCAC members have been nominated for another term.

Suzanne is presently the CCAC chair. Kernan has been the Rockville representative to the CCAC for over 7 years already. Doesn't anyone else in Rockville have an interest in telecommunications?

During last week's windstorms, I had some free time on my hands - the power was out and my uninterruptible power supply had long since run out of backup juice. According to the one remaining electro-mechanical clock in my house, I could see the time the power had gone out: 1:50pm

Around the time I got home in the evening, it was already nightfall. But I was pleased to see several crews with bucket trucks on my street. Naturally, I walked over to them and asked what was going on. (I planned to delicately work my way up to the real question: When would power be restored?)

They said "Waiting for Pepco." Shortly, several Pepco trucks showed and surveyed the scene: a tree had fallen across the street bringing down the support arms that had once been at the top of the pole. Everything that had been up there was now down here.

Actually the wires were suspended about 7 feet above the road. The tree itself was near horizontal, resting on the utility lines. Blithely, auto drivers continued to drive underneath it - after passing through yellow Do Not Cross tape as well.

After 10 minutes of discussion, the Pepco guys announced that everyone should go home and return in the morning. They gave several reasons why: 1) they had been working too many hours (16 hours) and needed a break, and 2) it was a huge job, and 3) it would be much safer to do this kind of work during the day. Left unsaid was that 4) it wasn't an emergency - at least not in their eyes.

So the ten or so people got back in their trucks and took off. This was around 10pm.

At this point, I decided I'd enjoy a little night air and see how many other homes were affected. So I walked around my neighborhood. Later, I created a map. You can follow it as I relate the rest of the story.

I walked north on Brickyard and then doubled back on Masters. Rounding a bend, I encountered a Comcast crew on River Falls. They were setting up a generator to power their equipment. I watched as they opened a lawn box and saw that it contained what appeared to be three car batteries. They claimed it was enough to provide power through glitches and short outages ("a few hours"). I asked them what the point of the generator was, given that we were in a sea of blackness - homes with no power -- TVs and computers that couldn't possibly be working even if the signal was there. They pointed out that their equipment served some homes further down Stable that still had power - although when I asked them how they could tell, they admitted they were just guessing. However, they added that customers using phones served by Comcast could use them without power to the home - since they can run for 8 hours on battery backup. I pointed out that the outage had started at least that long ago. So any phones that worked initially would likely not be working now. They shrugged their shoulders and continued hooking the generator up. They said the generator would run about 18 hours before needing refueling.

I continued walking; met a guy on Stable who was doing some late night repair. I was a bit concerned that he wasn't just robbing homes since house alarm batteries were surely dead as well by now and his truck was stuffed to the gills with "stuff". But he said he had just come from Home Depot and couldn't unload his truck because his garage door opener was electric. Eventually he convinced me and while we chatted, he handed me some ice cream sandwiches - they were already melting and probably wouldn't fare too well even inside his dead freezer. Good neighbor!

I walked over to MacArthur looking for more dead homes thinking I'd walk up Brickyard and get to see the tree from the south side. Two more tree crews were there - different ones than before. The guys in the first truck were taking a nap. I knocked on the window of the other truck. They told me there were waiting for Pepco. (At this point, I realized that it rhymes with "Waiting for Godot".) I pointed out that they might be waiting a long time given what the Pepco guys had told me earlier about coming back the following morning. I suggested they call Pepco but the the new guys said they work for the county (contractors, of course) so they don't talk directly to Pepco and we then had a long conversation during which I tried to get them to call their supervisor who surely could call Pepco and .... They didn't seem to be too enthused about getting the situation straightened out: "Hey, we're getting paid even if it's just to sit here." Probably with some overtime, too. (The Comcast guys said they prefer to work nights because they get a pay differential for working night hours.)

I walked over to Darmuid Green at this point but the outage didn't go far in. As I turned back, I saw the tree crew drive off. Perhaps they finally decided to call? As I was about to turn in, I saw another crew at Brickyard and Hackamore. It was 12:15am and I found the same Comcast crew, hooking up another generator. I was pretty surprised because I felt like I had been walking for hours (and I left their first site after they did) and yet according to them, this was the only other generator in the neighborhood that had been deployed.

Total homes without electricity: 116 (my estimate)

The next morning (Friday), I woke to ... no electricity and 5 trucks parked on the street including a Verizon truck. One crew told me they were there to put the wires back up but, sigh, had to wait for (can you guess?) Pepco to ground everything. I found that very surprising as the previous night's Pepco crew had done that - at least that's what they said. And it stands to reason, they wouldn't leave with anything unsafe. However, the morning crews didn't believe me and said they would just wait for Pepco. 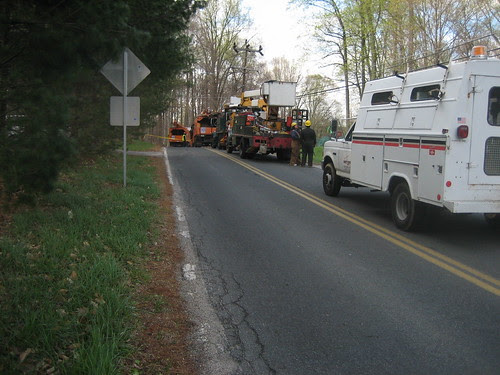 While continuing to wait for Pepco, I asked the Verizon technician whether he had installed any temporary generators like Comcast. He said they weren't needed - there's no electrical equipment in their boxes - each home has its own individual fiber running all the way back to their central offices.

I posted some of these same notes to my neighborhood mail list and asked whether residents were able to make phone calls on their Comcast Digital Voice or Verizon FIOS phones after their electricity went out. I got 8 responses. 7 said their Verizon FIOS phones continued working through the entire outage - they all pointed out that they had phones that ran off the power from the phone line. 1 neighbor said her FIOS service went down. She didn't respond when I asked about her phone. I wonder how clearly Verizon explains the customer's own responsibilities in an outage. In any case, I think this is very good news for Verizon, even more so because I understand the batteries in the Verizon's UPS are only rated for 4-8 hours, yet they evidentally powered the customer equipment for much longer. Our outage lasted 25 hours. Of course, longer than that and customers might be wishing for their copper back. (By the way, one of my neighbors somehow convinced Verizon to give him FIOS and let him keep his copper phone lines.)

Comcast on the other hand didn't fare so well. Not because people reported outages. Not because Comcast had to roll a truck to install generators everywhere power was out. And not because Comcast must have to maintain a huge number of generators sitting in a warehouse somewhere. No, the reason Comcast didn't fare so well is because not a single person in that 116 house area reported having Comcast Digital Voice service.
Posted by Don Libes at 4/23/2007 02:09:00 AM 1 comment:

A few tidbits to enjoy in honor of April 1.

An alternative for everyone waiting for FIOS TV ...

And two behind the scenes views of our favorite call centers ...